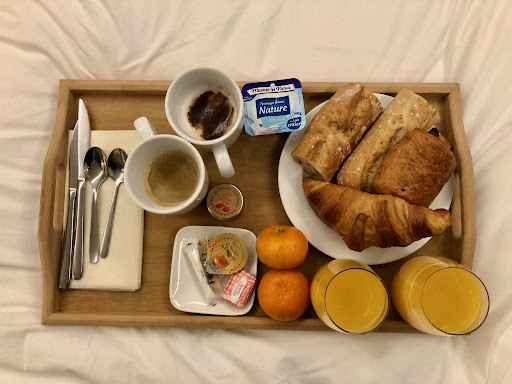 What could seem like a cliché is not true: bread is the base of French cuisine. If there were no bread, there would be no traditional French breakfast. This is a serious story. Continue reading to learn everything you need about the French breakfast, or le petit-déjeuner, as we say in French!

Crackers Or Baguettes For Bread

The bread is the first item you’ll discover in a French breakfast. The baguette is the bread variety that is seen most frequently. The bakery is where real French people purchase their french baguette loaf rather than the grocery store.

The latter baguette is frequently thinner and wider, but the essential distinction is in terms of quality: traditional baguettes must be freshly made on-site, additive-free, and never frozen.

The finest sensation ever is when you leave a bakery in the morning holding a freshly baked baguette that is still warm from the oven and smells so amazing you can’t resist biting into it.

Cracker is the secondary choice. It misses the baguette’s softness and flavor, but it has one major advantage over the baguette: because it is denser, you can dip a cracker in your coffee without getting crumbs on it.

Last but not least, the middle choice is toasty bread, which sits between fresh bread and crackers. The majority of French households include a bread toaster called a “grille-pain” in the kitchen.

Jam Or Butter To Spread On Bread

The next step is to spread something delicious on it, which is the second-most crucial component of your French breakfast. Jam is your first choice. France has two groups: those who use salty butter and those who use sweet butter.

However, you must realize realistically that salted butter is and always will be the best. It offers your bread a salty flavor that tastes and feels incredibly fantastic; the best sensation imaginable is when you taste salt and feel high-quality butter.

Another solution is to spread butter and jam on your toast at the same time, as some people do. However, there are still guidelines: the butter must come first to serve as a foundation, followed by the jam to add flavor to the entire dish.

Soak The Bread In Coffee Or Tea

The next step is to immerse the bread in a hot beverage, which is still another crucial component of the French morning (take a look at the best breakfast places).

Coffee may be the first hot beverage. Many French people find it only possible to begin a typical day after first getting their coffee.

Again, there are two camps: those who want strong coffee and those who prefer “café crème,” or coffee topped with milk, such as a latte.

French people wait to serve or drink their coffee with milk or cream. Most of them use plain coffee from coffee makers at work or home. Espresso is the most popular in France.

Tea is the second choice for a hot beverage. Although they consume a lot of tea, French people sip it differently than English people. French people like to drink their tea unsweetened, while English people occasionally add milk, sugar, or lemon to theirs.